Take Me Out To The Billboards 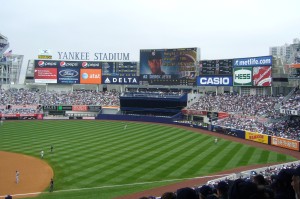 Yeah, but what's the score?

There was a time, my young friends, when people went to baseball stadiums to watch baseball.  Sadly, franchise owners no longer assume that is the ticket-buyer’s objective.  They believe the reason you come to the ol’ ballpark is to put your dainty butt in a $100 seat and drink $10 beers.  They also helpfully provide many distractions to keep you from noticing that a game is taking place on the field.

After all, if you’ve forked over that kind of money — not to mention what you paid for parking — why would you want to be annoyed by something as mundane as a game?  So what if it’s a 2-and1 count and the hit-and-run may be on — who cares?  “Look all around you, fans,” Major League Baseball now says, “there are many shiny signs all over this facility that will tell you when to clap and when to ‘make noise’.  We even have electronic pictures of the players’ faces that are fifty feet high!  That’s better than watching them from far away, isn’t it?”

I’ve been following baseball for many years, but it wasn’t until a recent visit to Yankee Stadium that I became aware for the first time that French’s is the official mustard of the New York Yankees.  But there it was, on multiple message boards — a dietary preference that any true fan should know.  As I bowed my head in shame at having been so ignorant of baseball lore, I missed seeing Mark Teixeira hit a three-run homer.

Electronic cannons thundered and millions of light-emitting diodes flashed.  The runs were registered on the tiny part of the scoreboard that is actually devoted to keeping score.  Hidden in all the advertising for soft drinks and other chemicals, the numbers were posted — but in tiny print, as though management was merely complying with a legal requirement, like that tag on your mattress.

Amid all the visual clutter and the racket from the multi-megawatt sound system, I could hear my inner voice whimpering, “I just want to watch the game.”  These days, a stadium is a lousy place to do that.

This entry was posted in Sports and tagged baseball. Bookmark the permalink.

5 responses to “Take Me Out To The Billboards”