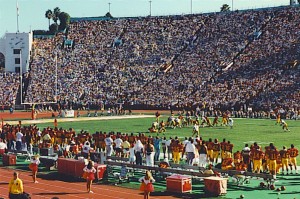 There are so many sources of enjoyment in life:  Hearing a choir perform Mozart’s Ave verum corpus in a candlelit concert at Notre Dame Cathedral in Paris is one of them.  Another is watching two good football teams knock the stuffing out of each other.

I like all levels of football, but I tend to focus on college football, mainly because I know I couldn’t get away with spending both days of every weekend in front of the TV from Labor Day to early February.  Since Major League Baseball recently had its All-Star game, sports fans know that football season is just around the corner.  With that in mind, here are my choices of the elite teams in college football for the 2009 season — one will probably be the eventual national champion.  In a future post I’ll supply a list of my preseason Top 25 so that by mid-October you’ll be able to mock my poor judgment.  For now, though, here are the teams I think are likeliest to be #1, listed in no particular order…

TEXAS     Only a last-second TD by Texas Tech kept the Longhorns from an undefeated season in 2008.  QB Colt McCoy, who was second in last year’s Heisman voting, returns.  The pass defense should be stronger than the unit of a year ago.  Texas is a lock for at least 10 wins — how many can they get beyond that?

USC     The Trojans’ string of seven consecutive seasons with at least 11 wins could be in jeopardy.  Last year’s defense was among the best in college football history; only three starters from that unit return.  Quarterback is also a concern with the departure of Mark Sanchez.  Coach Pete Carroll always seems to find a way to fill holes, though, so the 2009 edition may once again be among the nation’s finest college football teams.

FLORIDA     Last season’s national champion averaged over 43 points per game; opponents averaged only 12.9 points against the Gators.  Most of the lettermen return, including QB Tim Tebow — and all 11 defensive starters.  The favorable schedule includes Charleston Southern, Florida International, Troy, and Tennessee.

OKLAHOMA     The 2008 offense was statistically the best ever.  The Sooners scored 99 touchdowns and were the first team in history to have two 1,000-yard rushers and a 4,000-yard passer.  Running backs Chris Brown and DeMarco Murray join quarterback Sam Bradford for an encore — but most of last year’s offensive line doesn’t.  If that group can be rebuilt, Oklahoma could challenge again.

VIRGINIA TECH      The Hokies don’t get as much national acclaim as the schools listed above, but here’s something worth considering:  over the last five years, which three teams won at least ten games each season?  Right, Virginia Tech is one of them (USC and Texas are the others).  They should get to that plateau again; how they fare against Alabama in early September will give us a clue if they’re truly championship-caliber.

To be polite, I suppose we should include a team from the Big 10.  Ohio State and Penn State are probably the best from that conference, but both have lost a lot of talent.  The Buckeyes no longer have stars like Beanie Wells and James Laurinaitis; thirteen 2008 starters are gone from the Nittany Lions.  I expect both squads to be good, but not among the very best.  Meanwhile, fans of the Big East conference won’t have much reason to get excited until basketball season.

This entry was posted in Sports and tagged NCAA football. Bookmark the permalink.

One response to “Title Contenders”