Who Were the Luddites? 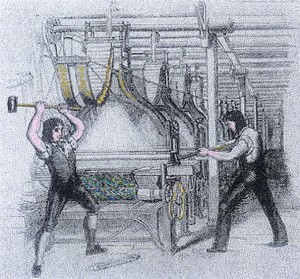 "And I hate microwave popcorn, too!"

The technological advances of the past couple of decades have enabled us to do things our ancestors could only dream of.  With cell phones, for instance, we can now talk to a loved one or business associate while using an airport restroom!  And it’s difficult now to imagine how empty our lives would be without cultural improvements like video games and on-line gambling.  There are, however, some grumps who fail to appreciate our battery-operated blessings; these people are sometimes referred to as Luddites.

It’s a term applied, usually with contempt, to those who oppose (or fear) new technology.  On the other hand, there are some of these technophobes who proudly choose to call themselves Luddites.  What both sides have in common is a hazy comprehension of who the original Luddites were.  So here’s the story…

Some of the early battles of the Industrial Revolution took place in Nottingham, England, in 1811.  Stockings and other hand-woven garments had been made there for centuries, but tycoons brought in power looms, built factories, and hired workers who didn’t know a warp from a woof.  This seemed like unfair competition to those making stockings in the traditional way, on wooden frames they kept in their homes.

The economy was lousy anyway, due to the expensive war being fought against Napoleon, and now the weavers were getting lower pay for their products.  Fearful that the new machinery was ruining their way of life, the weavers broke into factories at night and smashed equipment.  When these property crimes were investigated, those being questioned all said, “Ned Ludd did it.”

Ned Ludd probably did not exist.  A story — most likely fictional — had circulated about a Ned Ludd who had broken a couple of stocking frames in a fit of rage back in 1779.  He was definitely not around in 1811 when all the mischief was being committed, but he got the blame for it anyway.  The revolt spread to other shires in the Midlands, and over 200 frames were destroyed that year.

By 1812 the frame-breakers had made Ned Ludd their imaginary leader; they began to refer to him as King Ludd, General Ludd, or Captain Ludd.  You can see, then, how his “followers” came to be known as Luddites.

While they deplored recent technological innovations, the Luddites didn’t seem to have any qualms about an earlier invention known as the musket; hostilities escalated, and there were casualties on both sides.  The government cracked down — in 1812 Parliament passed something called The Frame Breaking Act.  The poet Lord Byron had made an impassioned speech against it in the House of Lords, to no avail.  The law authorized some harsh penalties:  Those convicted of breaking machines could be sentenced to death, and many of the Luddites did go to the gallows, still blaming King Ludd.  Others were transported to the penal colony that eventually came to be known as Australia.

By 1817 the Luddite movement had virtually disappeared; the former hotheads were dead, or working in factories, or co-existing with kangaroos.  Ned Ludd, a mythical character who had been their imaginary leader, passed into history.  For that matter, so have stockings.