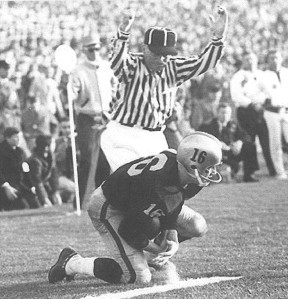 In case you missed it, here is Rollie Stichweh's TD...

Evolving technology has changed sports so much that it is now possible for viewers to see replays of a ballplayer spitting from many different angles, and in super slow motion.  The fan in the stands sees the game in a very large format, but the fan at home sees a lot more details, and sees each play several times.  (Also, the home viewer has shorter lines for the rest room.)

We have grown so accustomed to video replays that it may be hard to imagine a time when it didn’t exist, but I happened to be watching the day the first replay appeared on national television.  The date was December 7, 1963, and the event was the Army-Navy football game, which had been delayed a week due to the assassination of President John Kennedy.

CBS was carrying the game, and a young director named Tony Verna was in charge that day.  Verna had been experimenting with the idea of video replay since the 1960 Olympics in Rome, and he was sure he had figured out a way to play back the action moments after it happened.  He persuaded his bosses to let him ship a 1,200 pound Ampex videotape recorder from New York to Philadelphia for this game.

Those machines used large reels of tape that was two inches wide — digital recording didn’t come along until decades later.  Verna’s plan was to keep a camera hooked up to that recorder and trained exclusively on the two quarterbacks, Roger Staubach of Navy and Rollie Stichweh of Army.  An audio engineer would insert a “beep” on the tape before each play began; then, if something exciting happened, the video replay technician could rewind to the “beep”, and then hit play within a matter of seconds.

That’s how it was supposed to work, but there were problems with the replay machine throughout the game that day.  Sometimes it took too long for the image to stabilize, so there was just visual static.  In other instances, the recording heads on the machine simply failed to record anything at all.

The engineers managed to get it working for one play:  Army QB Stichweh (rhymes with ditch day) ran into the end zone from one yard out with 6:19 remaining in the game.  As I recall, that touchdown was replayed only once, and at normal speed — there was no slo-mo back then.  Army’s two-point conversion was not replayed, nor was the subsequent on-side kick, which happened to be recovered by Rollie Stichweh.

Navy held on to win the game 21-15, and although Midshipman QB Roger Staubach didn’t figure in the historic first replay, he got the consolation prize of winning the 1963 Heisman Trophy, and eventually made the pro football Hall of Fame.  Tony Verna went on to a storied career at CBS, receiving a lifetime achievement award from the Directors Guild of America.  Rollie Stichweh served in Vietnam and lived to tell about it; from what I read, he and Staubach remain close friends.  As for instant replay — you already know what has happened to it since 1963.  I mean, can you believe the ump blew that call!?

This entry was posted in Sports and tagged instant replay. Bookmark the permalink.