Who Were the Founding Fathers? 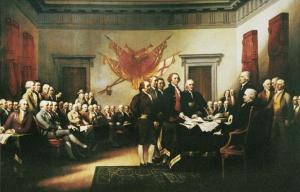 It was one of America’s least-admired presidents, Warren G. Harding, who coined the term “Founding Fathers”.  Speaking at the 1916 Republican convention, he used it in reference to the men who transformed America from a cluster of British colonies to an independent nation.

They are now spoken of with great respect, and deserve to be.  We tend to think of the Founding Fathers as demigods, though, or at least as men who always conducted themselves with the greatest decorum, as if they were posing for that picture on the back of the two-dollar bill (see above).

In fact, there were intense personal rivalries among the Founding Fathers.  According to historian David McCullough, animosity between Alexander Hamilton and Thomas Jefferson “reached the point where they could hardly bear to be in the same room.”

A Jefferson ally, James Callender, attacked John Adams in print, calling him “that strange compound of ignorance and ferocity, of deceit and weakness.”  Adams muttered about Benjamin Franklin, who had famously promoted the virtue of “a penny saved is a penny earned,” but in his personal life was a big spender.

Even George Washington was the target of insults.  Thomas Paine, a key figure in the American Revolution, slammed Washington as “treacherous in private friendship… and a hypocrite in public life.”

As author Ron Chernow noted in the Wall Street Journal, “After sharpening their verbal skills hurling polemics against the British Crown, the founding generation then directed those energies against each other.”

While some of the attacks were rooted in personality conflicts — this guy didn’t like that guy — much of it had to do with the clash of competing concerns as they groped their way toward a new form of government.

Jefferson didn’t want a president to have much power, worried that he would become a de facto king.  Adams wanted to safeguard against the proposed Senate becoming an aristocracy.  Hamilton, John Jay and James Madison wrote persuasively for the new federal government, while Patrick Henry and others were wary of it, citing concerns about states’ rights.

So who were the Founding Fathers?  How did one qualify for inclusion in this particular pantheon?  Sometimes they are narrowly defined as those who attended the Constitutional Convention of 1787.  But that would leave out John Adams, Samuel Adams and Thomas Jefferson, among others.  Besides, what do you do about Elbridge Gerry, George Mason and Edmund Randolph, who attended the convention but refused to sign the document?  Incidentally, only six men, Franklin among them, signed both the Declaration of Independence and the Constitution.

It seems fair to say that the Founding Fathers should include those who had important roles in the fight for independence, the drafting of the Constitution and Bill of Rights, and who actually steered the fragile new government that had resulted from their efforts.  Only a few have been named here.

There are many whose names you may not know, like Gouverneur Morris of New York, who had a wooden leg.  His official story was that he’d had a carriage accident, but some accounts attribute it to a leap from a window to escape a jealous husband.  Sadly, Gouverneur Morris never became governor, but he had a lot to do with the final wording of the Constitution.

They were a diverse group of men; stubborn and contentious at times, but cognizant of the need to negotiate and compromise, ultimately finding common ground.  They weren’t the titans we sometimes imagine them to be, but were hotheads and skeptics and windbags and risk-takers — in short, they were a lot like people we know.  That’s what makes their achievement so remarkable. 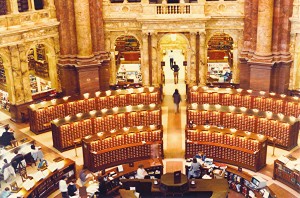 Library of Congress: The A – F card catalogs in 1984 (photo by Sally Reeder)

How many books do you have?  Don’t bother to get up and count them, just take a guess — fifty, a hundred, three hundred?  Whatever you think the number is, keep it in mind when I tell you that in 1814, Thomas Jefferson had 6,487 books.

We know that because after the original Congressional Library was set afire by the British during the War of 1812, the former U.S. President offered his collection to replace that loss.  Congress wasn’t sure they wanted all of Jefferson’s books, since some of them were in foreign languages and some were about art and cooking and botany — subjects that didn’t directly pertain to making laws, they felt.  Some were even deemed “immoral and irreligious.”

With some reluctance, a congressional committee offered Jefferson $23,950 for his collection, which was substantially less than it was worth.  Jefferson accepted their low-ball offer, though, and his books became the basis for today’s Library of Congress, which happens to be the world’s largest library.

Its website currently states that the collection has more than 34.5 million books.  There are also 13.4 million photographs, 5.4 million maps, not to mention millions of manuscripts and pieces of sheet music and newspapers and movie scripts.  The whole collection is approximately 152 million items.  And you thought that weird old guy down the street was a hoarder — psshhh!

By the way, that 152 million items is today’s count.  Several thousand more will be entering the inventory tomorrow, and the day after that, and so on.  All of those items are currently stored on about 838 miles of bookshelves — roughly the distance from St. Louis to Denver.  Can you imagine dusting those shelves?

What I find even more mind-boggling (and my mind is not easily boggled) is that the Library of Congress is expanding its collections beyond things recorded on paper and parchment.  It is now also the repository for digitally-created documents, including Twitter tweets.  OMG!!!

It seems to me that what your friend had for dinner or what they think of that dreamy guy on American Idol is of dubious value, but our national library takes its mission seriously.  On its website, the Library of Congress asserts that it is “the world’s most comprehensive record of human creativity and knowledge.”  And that’s what all writing is, really:  a way to preserve thoughts.  Even if they aren’t particularly good thoughts.

Meanwhile, the U.S. Copyright Office (a part of the Library of Congress) is working on legislative solutions to make it possible to digitize out-of-print works.  The objective is to create a universal digital library, so that citizens can have instant access to works ranging from Sir Isaac Newton’s Principia to Mia Farrow’s autobiography.

When everything eventually does make the transition to digital, it will reduce the chances of a loss like the one the Library of Congress sustained on Christmas Eve, 1851:  There was another fire, this one caused not by the British, but by a faulty chimney flue.  Two-thirds of the collection went up in smoke, including most of Mr. Jefferson’s books —  and, presumably, several works on the subject of fire prevention.

Posted in Language and Literature